A while back, I was invited to a potluck dinner at the campground. Someone had brought a most interesting dish that was made with sweet potatoes, red peppers, and onions. I know it sounds weird, but it really was good. So, this weekend when we went to the grocery store, they had some of those little sugar pumpkins and the first thing I thought about was that sweet potato dish. I got one of the pumpkins and used it instead of sweet potato. Do I have to tell you it was YUM! 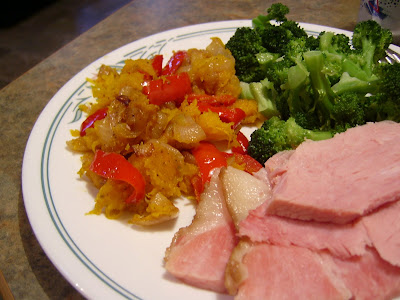 To make this, use a small sugar pumpkin. Cut it open and scrape out the seeds and stringy stuff. I cut mine into four pieces. Spray it with olive oil, put it on a baking sheet, and bake in the oven for one hour. Let it cool enough to handle it, then scoop out the pumpkin pulp and throw away the peel.

For my pumpkin and peppers, I put some olive oil in a skillet. Sautee some red pepper strips and onion. Add in two cups of the pumpkin and cook for a few minutes to blend the flavors. Add salt and pepper to taste. Very easy, very yum. I served it with baked ham and broccoli. I think it is my new favorite dish. I know I will never buy canned pumpkin again.

I used the rest of the pumpkin, about 5 cups, to make a pumpkin souffle.

Mix all together well, and pour into a greased baking dish. Bake at 350 degrees for about an hour, or until a knife inserted into the center comes out clean. Serve with ice cream or whipped cream. MMMMMM.