Yesterday I forgot to take my jacket with me when I went out to the entrance to go to work. I’ll never forget again. As I drove in I could see the storm coming. It started raining, then it got cold, so I made a fire in the woodstove. A while later, the rain stopped and it warmed up, so it was too hot in the building. Oh, well. Live and learn. 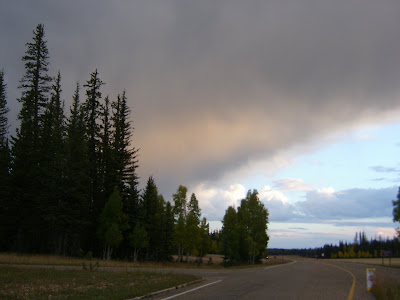 After the storm, the sunset was gorgeous. I saw some deer cross the road, then come running back to cross again. I wondered if there was a coyote out there. There has been one hanging around in that area for a couple of months. The people coming through the gate have told me they have seen it, but I have not caught even one glimpse of it yet. 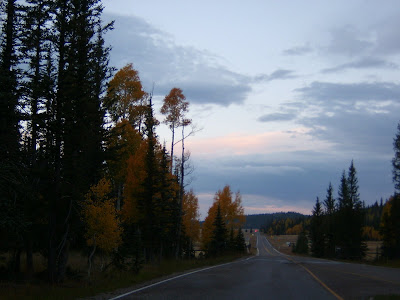 Today, we drove out to the Kaibab National Forest, down to Forest Road 610. The aspens are almost at peak color, the sun was shining, and the sky was full of big puffy clouds. It is amazing how big the sky is out here. 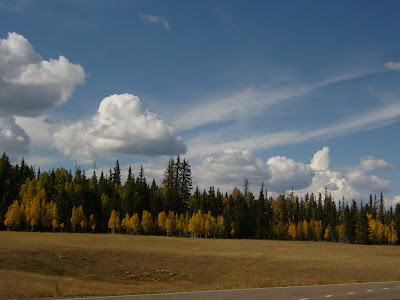 The road started out pretty smooth, but the last four or five miles were pretty rough. We passed an area where fire workers were cutting underbrush and stacking it. There were at least seven trucks out there. They do a great job of controlling the fuel wood so that if a fire were to be started by a lightening strike it would not spread far or burn too hot. 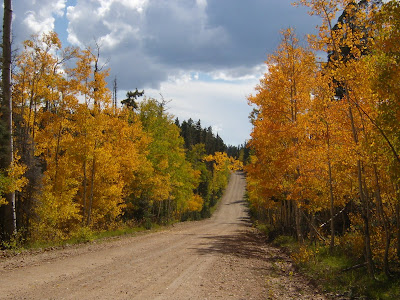 This last picture was taken from the beginning of the Nankoweap Trail. The drive out to the Nankoweap Trailhead was about 13 miles. We had planned to hike a little way down that trail, but it got steep really fast, and we know our limitations, so we turned back. We were a little disappointed because we wanted to go out there, but it is always best to be safe. 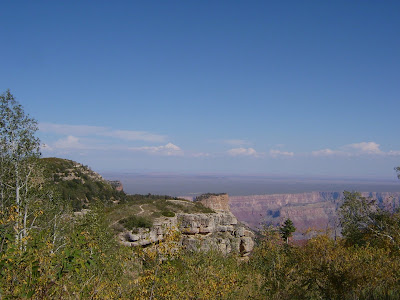