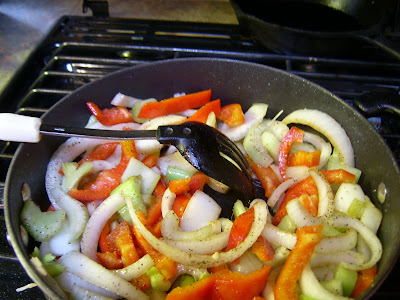 MMMM, Peppers, Onions, and Celery for the roast.

This morning I got up and checked the thermometer we have in the freezer section of our refrigerator. Not the new one, but the one that has been on the blink. The freezer part had been getting down to around 40 degrees, so we had some things in there while we tried to use it all up, you know, meats, frozen veggies, and some frozen fruits. So, this morning, the temp on the thermometer was 59!!!

I took everything out, and had to throw a little bit away, but there were several things that I could save IF I cooked it today. So, I put some chicken thighs and some pork country style ribs in the oven and baked them. I just put some meat tenderizer and some seasoned salt on them. After they were cooked, I packaged them up in meal size portions and put them in the little freezer compartment of the new fridge.

I had a small beef roast in there, too. I had been saving it for a special meal, because I don’t cook beef very often. FabGrandpa’s doctor back in Georgia told me not to let him eat very much beef. So, most of the time, he only gets beef if we eat out, which is not very often. But last time we went to Page, this roast was on sale for a good price. I used about a 1/4 of it to make beef stew last week and put the rest of in the freezer. 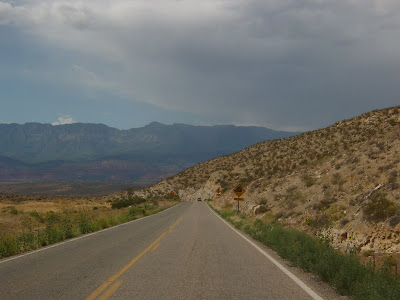 Starting down the grade into Hurricane, Utah

So, today, I sprinkled the rest of it with tenderizer and seasoned salt, then seared it in a skillet with olive oil and then put it in the crock pot. I cut up some celery, onions, and a red bell pepper and sauteed those for a few minutes in the skillet, then dumped them in on top of the roast in the crock pot. I left it on high for about an hour while I got dressed, cleaned up the kitchen, and made up the bed. We decided to run down to Hurricane, Utah (about 100 miles away) to pick up a part we had ordered at the RV place there, so I turned the crock pot down on “warm” while we were gone. 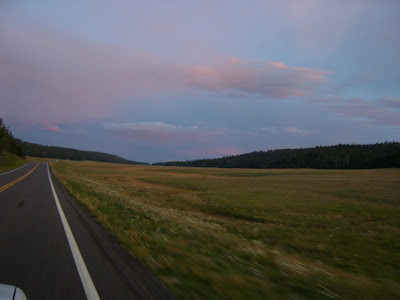 Sunset when we were coming back home this evening.

When I got home, that roast was just right! MMMMMMMM.