It was only 13.3 degrees on Thursday night, the coldest I have known it to be in Georgia before Christmas. The wind was howling outside, but we were snug and warm in our new trailer. I could notice the difference right away, because whenever the wind would blow when we lived in our Starcraft, it was LOUD and there was usually a breeze or draft going through the trailer. In this one, though, I could barely hear the wind outside, and there was no draft inside.

Before I forget, I have to let everyone know how much help Gary and Faye were to us on the day we moved. After we signed all the paperwork and did the walk-through, they arrived ready to work. Faye and I were in the old trailer, handing stuff out the door to the guys until most of the things that were boxed up were moved. Then I went over to the new one and started putting things away. Faye stayed over in the old one and packed things up to be moved. You know, I thought I had gotten rid of a lot of stuff! But, the truth is, I still have too much. I have been throwing stuff away for three days now, and making a pile for selling on ebay too. I was truly embarrased at how much was packed away in that little starcraft! It only took half the day to get things signed and moved. 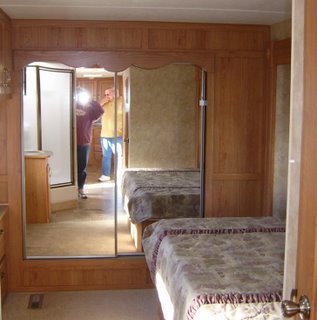 After we got back to Unicoi, I spent the rest of the day trying to find things. At about 6 pm, Gary knocked on the door with a pan of burritos. They were absolutely delish, so good that Fabgrandpa said he was going to ask Gary to marry him!!

Ok, the top pic is a closeup of one of the window treatments in the kitchen. The next one is the bedroom, or at least part of it. That is me with the camera, and Fabgrandpa in the mirror. 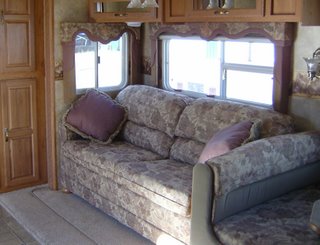 Next is the sofa in the living area, I hope you can see the window treatments and the cabinets over the sofa. Jayco calls this color scheme “Spring Willow”, which sounds like it should be green, but is more brown and beige, very little green in it. The next pic is a closeup of the sofa fabric, so that you can see more of the colors. If you click on the pictures they will enlarge so you can see them better.

Yesterday we went down to Gainesville to 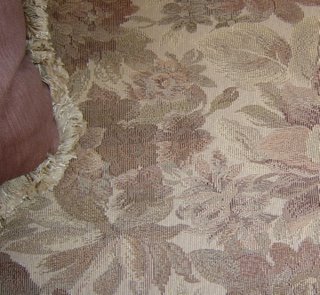 Target so we could get some throw rugs. The rugs I got are mostly orange, brown and beige, with a little bit of dark green in them. They all look pretty good in this new place.

We also went to Lenscrafters and got new glasses. Well, we ordered them, they will be in next week. I will post of pic of me in new glasses when I get them. It is still cold, with a forecast of high teens for tonight, and relative humidity of 15-20%! BRRRR. I want to go to Mexico!!!