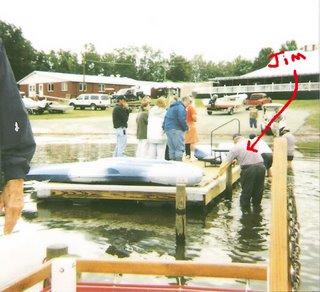 We had a another very busy weekend here at the campgound. It was the annual Down on the Rivah Rally,which included a dinner on Friday night, followed by a concert with a country music band; breakfast on Saturday; an all-you-can-eat steamed crab feast on Saturday night; and breakfast on Sunday morning. There was also an RV show in the park for the weekend, with several dealerships from the area displaying new travel trailers, 5th wheels, and park model trailers for sale. And there were supposed to be river cruises on the company boat.

However, there was that bit of weather known in this area as a “nor-easter”, that dumped several inches of rain and brought 30 mile per hour winds on Friday. The front stalled in Virginia and dumped even more rain on us on Saturday. So, with about 220 rv’s scheduled to arrive Thursday and Friday, and water standing in a lot of campsites, it made for a lot of work just to get the people parked when they arrived. We only had about 20 “no-shows”, which was pretty good, considering…

Most of the rain was about 30 miles west of us along the route of I-64 from Norfolk to Richmond. They were getting about 4″ of rain PER HOUR! Because it was to the west of us, we only got about 4″ of rain in two days, but the flooding in other areas caused a lot of our campers to have trouble getting here with roads flooded or washed out, and they had to make detours. The rain and high wind along with the October full moon caused a really high tide for this time of year and our dock where the boats come in was under water for about two days!!!

We all had to work long hours. I opened the office on Thurs, Fri and Sat at 7:45 am, and worked there until 5 pm. On Friday night, I went over to the Group Rally Center next door and worked on the serving line until 7pm. On Saturday, I worked until 2pm in the office, then went to the GRC and worked on the serving line from 5:45 til 9:oo pm. It was fun though, and even though I was tired, I had a good time doing it. After we finished serving the crab feast on Saturday night, the manager gave each of us a flat of crabs, which is about 18 or so steamed crabs. My friend Lynn gave hers to me because she doesn’t eat them. I took them home and cracked off the shells, and put the legs and and meaty little crab bodies in the fridge. It makes them take up less space in the fridge if the shells are taken off. So now I just have to eat them all!!! 🙂 I just LOVE steamed crabs!!!

The boat rides up the Rappahanock River had to be cancelled on Friday and Saturday. On Sunday, Fabgrandpa and a couple other guys were hard at work pulling the floating dock by hand out to the boat (with people on it) so they could board the boat for the cruise cr1st.That was the only way they could get people on the boat. I have posted a pic so you can maybe see what I am talking about. It was like he was pulling a ferry from the boat ramp out to the boat. Anyway, he was having a good time doing it, bare feet and all.