I almost forgot to tell you all about Shamrock, Texas. We stayed at the West 40 RV Park in Shamrock last fall when we were on our way from Arizona to Alabama. We bought a tire for our trailer in town at C & H Supply. We enjoyed the good people of Shamrock so much that we decided to stop in again and spend a couple of days there. West 40 is not the cheapest RV park in town, but we like it, the sites are flat, and the people who run it are super nice. We paid $25 a night to stay there after a Good Sam discount. They have free wi-fi and full hook-ups. The park is 44 years old and has not been upgraded, but like I said, we liked it.I didn’t take any photos of it this time, but here is our site from last fall:

After we got set up, we went to town looking for something good to eat for dinner. We found Big Vern’s Steakhouse, on Route 66 right in town. We liked Big Vern’s so much that we went there two nights in a row.

FabGrandpa had the 16 oz ribeye and I had the 10 oz one, and they were the best steaks we had ever put in our mouths! It’s not cheap to eat there–we spent $50 plus tip both nights, but i can not tell you just how good those steaks were!

Oh, yeah, it came with two grilled shrimp, bread, and your choice of two sides. We got the carmelized mushrooms and onions and a baked potato. Both nights.

I found the necklace that I bought to wear to Becky’s wedding and then lost, so I wore it the second night we went. Cute, huh?

Since we were in town for a couple of days, we went exploring to see what we could see. The tallest water tower in Texas is located in Shamrock, so we drove through downtown to see it. Don’t you just love exploring old towns?

FabGrandpa used to work at an Ace Hardware store, so we always have to go in and look at them when we travel. This one was also the grocery store and pharmacy. The people who worked here were soooo nice! I had to get a prescription filled, and instead of transfering it from Wal-Mart, the pharmacist sold me 5 tablets to get me to Flagstaff. I call that “Great Service!”

I also can’t tell  you enough just how helpful and nice the folks at C & H Supply in Shamrock were, again. Last fall, we had a blowout on the trailer just outside of Amarillo, and bought one to replace it from them. When we were in West Memphis, we went to the Goodyear Tire Store there to replace the one that blew out on the first day of our trip. That guy charged us $165 for one tire. He mounted it on the rim, but didn’t put it on the trailer. At C & H Supply, we bought two tires, had them mounted and balanced, moved one tire to the spare AND they put the two news on the trailer for us, all for $278.  We highly recommend them if you are traveling and need new tires.

While FabGrandpa took care of the tire business, I walked next door and took pictures of the Tower Service Station. The building was built in 1936 as a Conoco Service Station and restaurant, but you may recognize it from the Disney movie, “Cars”.

If you’d like to find out more about Shamrock, here is the link to the Shamrock Visitor’s Guide.

When we arrived in Shamrock, Texas on Thursday, we had already decided to stay three nights. We were ahead of schedule for our destination of Flagstaff, and we needed to buy two new tires for the trailer. The tire store here in Shamrock treated us so well last fall that we decided to give them our business again. So, when we checked in at the West 40 RV Park, we signed up for three nights.

Thursday evening, the wind got up. I mean, it REALLY got up! It was blowing 40 to 50 mph with gusts up to 65 mph. Our trailer was not only rocking, it was swaying back and forth. The windows by the dinette were being sucked open, then let go so it seemed like they were flapping wings, trying to take the trailer off into flight! It blew the tonneau cover open on the truck. I was afraid to cook for fear the pots would slide off of the stove!  I was thinking that not even one of those heavy duty awning tie down straps

would help in that kind of wind. These high winds went on like that until around 6:00 p.m. on Friday, when just as quickly as it started, it stopped.

While this was all going on, I thought about those windmills we passed in Oklahoma on the way here Thursday. I could just imagine them spinning like a child’s pinwheel

in those high winds. I wondered if they ever broke off and took off across a field? A google search found this one, that happened in Denmark. While it didn’t actually spin off across a field, it did break and cause damage. Wow!

We started out the day climbing up those Sandia Mountians at Albuquerque. After less than half an hour, we were on flat land again. And it stayed flat most of the day. 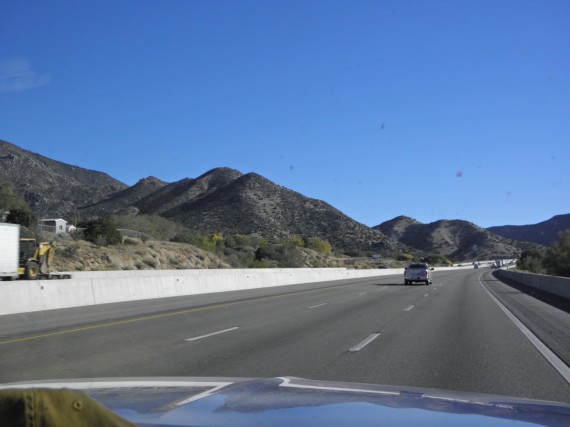 Evidently, New Mexico does not have any laws against having billboards on the side of the highway. There seemed to be groves of them:

We saw several wind farms off in the distance. This modern windmill is in Tucumcari, New Mexico:

After we filled up the truck at Flying J in Tucumcari, FabGrandpa decided to drive over the scales. Ooops, maybe I DO have a tad too much fabric after all. Hmmm, I’ll toss groceries first if push comes to shove. We’re still under, but can’t buy anything else!

So, we officially left New Mexico and crossed over into Texas. New Mexico is one of the only states I have been in that has a sign telling you you are leaving:

It’s a good thing they told us, because west Texas was more of the same flat landscape, for miles and miles.Here is your RV minute for today, showing just how flat and lonely it is out here. This is I-40, going east, west of Amarillo, Texas:

There were more wind farms closer to Amarillo. I especially like this photo of an old fashioned windmill with the wind farm in the background:

We made it through Amarillo before the five o’clock rush, which is great!

Because a few miles outside of town, we heard a POP! The rear driver’s side tire on the trailer blew out! We had to stop on the side of I-40 and change the tire! It was pretty scary out there with all those trucks whizzing by! This was the same tire that blew out the first time we were going to Arizona in April of 2008 (well, not the same tire, but in the same position on the trailer) Wonder what is up with that?

We made into Shamrock, Texas to the West 40 RV park just at sunset:

I made us a “Road Trip Seafood Platter” for dinner: Tuna salad with avocado, smoked oysters, pear salad, and crackers. I had Glutino gluten free, he had Ritz. Yummy! 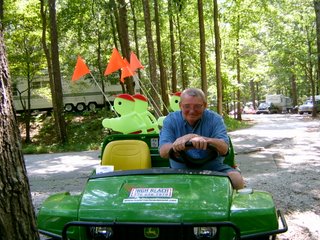 One of the reasons we live the way we do is so that we can go where ever we want to be and get to stay there for more than a week or two. We have been to several states in the six years we have been work campers. We spent two and a half years in south Texas, a winter season in Florida, and a couple of summers in the mountains of north Georgia. Last summer we worked at Stone Mountain Park in Stone Mountain, Georgia. I worked in the retail operations office, answering the telephones and monitoring the radios. My husband, FabGrandpa, was a maintenance worker in the campground. On weekends when we expected a lot of children to be camping there, one of his duties was to put out these “Slow Children” signs on the roads. I love this photo of him with his buddies.