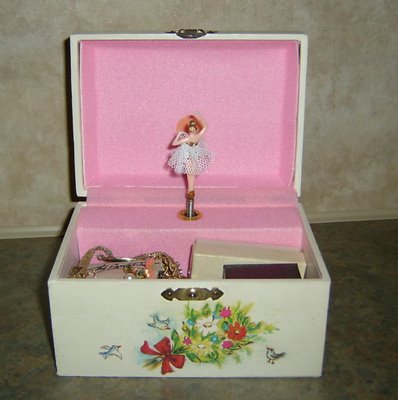 As most good Fab Grandma’s do, I have stories that I tell my children and grandchildren, over and over, at certain times of the year, ad nauseum…It is like a tradition to tell them even if no one wants to hear them again. So, with that in mind, here are a few of my Christmas memories, some good, some bad, but memories just the same.

The first Christmas I can remember was when I was about 5 years old. I had asked Santa for an electric train for my gift. Wouldn’t you know it—he did leave one at our house, but he mistakenly put “To Preston” (my younger brother) on the tag. How depressing is that? You ask for a train, a vehicle with power to let you escape into all the imaginary far away places a little girl could think of to travel, only to receive a stupid baby doll that hollers “Mama” at you, all the while peeing sweetly into her little panties. Now I suppose that in 1957 no respectable little girl would even ask for, much less actually receive, an electric train. No, we were relegated to practising to become little mothers, staying home spooning gruel into one end and wiping poop from the other, of our darling little babies, whilst our HUSBANDS, the MEN, traveled the work in their trucks, trains, and planes. I wish someone would invent the toddler doll that would wake up during the night with an asthmatic wheeze and rattle in their chest, crying “Mama” in agony while it throws up on the bed and squirts diarrhea out it’s little hiney. They could name it “Reality Check Carla” or something like that. Of course, there may not be much of a market for it, maybe young women whose husbands are pushing them to have a baby could get one for their spouse…Or, it could be part of that child care course taught to high school kids instead of using eggs.

Oh, I’m sorry, I was supposed to be telling a story here. Well, that little electric train was really cool. It puffed smoke out of its fake smokestack as it chugged around the track. We thought that was pretty amazing. And as for Betsy Wetsy was concerned, my older brother cut her head off to find out how she worked.

Several years later, when I was 9 and my sister was 18 months old, I asked for a jewelry box. In my little girl brain, I could see the little ballerina dancing around and around to the music from the music box. So, on Christmas Eve, all of us kids went to bed, too excited to sleep. After a while, we could actually hear Santa in the living room. He was playing with our toys, and from the sound of it, he seemed to be talking to Mama and Daddy. Suddenly, I could hear the music box playing—I think Santa must have enjoyed hearing it because he wound it up and let it play about 15 times. So, in the morning when we finally got out of bed and went into the living room, I saw to my horror that the jewelry box Santa brought was a satin covered, velvet lined pink box that was obviously meant for a much older girl. It had no music box, and no ballerina. The music I had been hearing was a wind up Fischer Price clock for my baby sister. I was too stunned to say anything. I tried really hard not to cry. I cannot think of a single other time in my life when I have been more disappointed.

The jewelry box I received that Christmas stayed in my possession until I was almost 50 years old. My older brother had taken a magic marker at some point and written “DUMB GIRL” inside the lid. I saw that every time I opened that box. Maybe that is why I don’t wear much jewelry.

So, fast-forward about 30 years. When my oldest daughter was 14, she could hardly wait for me to open her gift to me that year. For weeks before Christmas I had jiggled and wiggled it, shook it and held it, trying to figure out what was inside. It was not the shape or size of anything I had asked for. On that Christmas morning, Rebecca, Emily and Seth insisted that I open that gift first. Because of that, I think maybe I expected it to be a camera. Imagine my surprise, when the wrapping paper came off, to find a little jewelry box, with a ballerina and a music box! I cried like a baby! Those were uncontrollable sobs and a flood of tears. My children sat there, the looks on their faces telling me that they thought they had done something terribly wrong. How could they even begin to understand what that jewelry box meant to me? How could they know they had given me my childhood? That there was so much more than just a little jewelry box inside that gift? Yeah, a stupid as it sounds, that one moment is THE moment in my life that I cherish most. I still have that little music box, and the little ballerina presides over my most precious jewelry. All the rest of it goes into an empty baby wipes plastic box.

A year or so after I received the ballerina music box, my children surprised me again. This time, it was Emily’s gift. That year, my son and I went together on a Saturday morning to take the test for a GED. I had never finished high school and Seth had quit as soon as he turned 16. So, to get him to go take the test, I volunteered to go with him. We both passed with flying colors, and received our GED certificates in the mail. That year, Emily gave me a high school class ring for Christmas. It has the year I took the GED test, the name of the high school I attended when I was a teenager, my first name, and a tiger on the outside of it. There is an emerald green stone, because my birthstone is an emerald. My initials are engraved on the inside. I didn’t cry like I did when I received the jewelry box, but just knowing how proud my children must have been of me was a wonderful feeling. I keep that ring in my ballerina music box.

And so, here we are at Christmas time again. I hope you have enjoyed my stories, and may you all have a memorable Christmas this year.