They whole herd was out in the meadow this morning when we left to go to town. They aren’t buffalo–they’re beefalo.

And they’re not native to the North Rim of the Grand Canyon. Sometime in the early 1900’s two ranchers in the House Rock Valley area tried to create a hybrid herd of animals that are a cross between cows and buffalo. 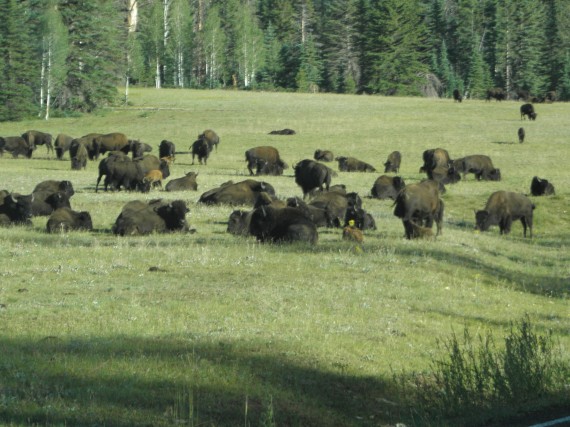 They were trying for a better meat product. Their experiment failed for their purposes, but the hybrid herd has survived.

They spend the winter months down in the desert around House Rock Valley, but in the summer they migrate up the Kaibab Plateau looking for water and grasses for food.

They occasionally spend a few days in the meadows along Hwy 67 on the way into the park.They have been hanging out there all week.They are traffic stoppers for sure, because sometimes they just stand in the road.