A few weeks ago I was asked to review the Wearever Incontinence Underwear. I was a little put off by that request, but then I decided that it WAS something that women of all ages need to know about. So, I agreed to go ahead with the review. I received the panties last week, and they really ARE nice panties. 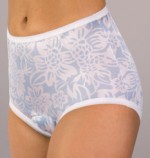 When I was in my 40’s, I had a problem with incontinence. I had birthed large babies, from 8 lbs. 4 oz to 10 lbs. 8 oz.  Because of that, I developed a problem where when I sneezed or laughed, I couldn’t control my urine. I could be anywhere: Wal-Mart, out to dinner with friends, visiting at someone else’s house. If I sneezed or laughed, I would pee on the floor! It was so embarrassing! I had surgery when I was 46 to correct it and have not had a problem with incontinence since then. But, it would have been nice to have known about these panties way back then.

I decided to put these panties to the test, to see if they really would hold the amount of liquid the company said they would. The panties I received were the light absorbency ones, so they should hold 4 ounces of liquid, or half a cup. Please note, after I finished editing the following video, I realized that I referred to the panties holding 1/4 cup of liquid a couple of times. I should have said 1/2 cup.

I would like to add here, that even though these panties are marketed towards people with incontinence, since I had the opportunity to see them in person, I think they would also be great for someone who has a heavy menstrual cycle. I used to have a heavy flow, and often had “accidents”  and wound up with very embarrassing spots on the back of my clothing. If I had some of these innovative panties back then, it sure would have helped prevent that.

Wearever is giving one of my lucky readers a 3 pack of panties of their choice of  style, whether men’s or womens, and absorbency level.  (Does not include the Seamless Shaper) To enter, use the Rafflecopter form below. The giveaway will close on September 24, 2012. Value of prize is Up to $59. Open to residents of the United States only.